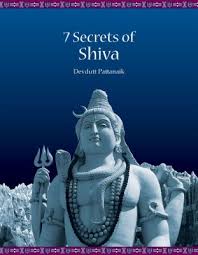 Yes, I did receive this book – 7 Secrets of Shiva, as part of the Book Reviews program by Blogadda. And I am glad I received this book, giving me an opportunity to get through the secrets of life, which is an inherent part of this book.

This book deals with Shiva, exploring the meanings of his forms through 7 chapters or secrets, which are Lingeshwara, Bhairava, Shankara, Bholenath, Ganesha, Murugan, Nataraja.

Being born and brought up as part of an orthodox family, we were taught to worship and pray to the various deities and learn the rituals associated with it. But never were we allowed to ask a “Why” or initiate a conversation that might probably deal with details, which the elders shunned to discuss with us.

And a few years back, I happened to hear that the representation of the form of Shiva Linga, is based on a phallus. First, I was shocked and then stunned !!! Read Wiki’s explanation here.

But, now here comes a book, that actually explains what this form represents in fantastic clarity and how it is beyond the simple pleasures of life.

It is interesting to note here that, even though we visualize Shiva sitting on a snow-capped mountain, with snake around the neck, wearing an animal hide, with Ganges flowing out of his hair turban, this is not a form found in any Shiva temple for worshipping. Shiva is worshiped only as a Linga, predominantly.  The importance of this form of worship becomes evident, as I read the first secret – Lingeshwara.

The second secret of Shiva, the Bhairava deals with the aspect of how Shiva removes the fear of death in the humans. He is the Kaal Bhairava, meaning the one who removes the bhaya (fear) of Kaal (time), thereby offering immortality.

How Shiva stills the mind of humans, is the core of this secret.  Even though the examples are aplenty to make us understand this concept, it just cannot be attained in one reading. While the research efforts by the author are commendable, its sometimes difficult for the human mind, to go beyond the conventional thinking and to break the mortal fear and reach for the soul.

The importance of the number 3 in Shiva’s mythology, is quite an interesting observation.

Shankara, the third secret deals with how Nature, the Shakti hopes to transform Shiva, the insensitive angry god, into Shankara, the god who shows empathy and is patient towards the humanity.

Shakti, the nature, tries to achieve this transformation of Shiva to Shankara through being Sati, the daughter of Daksha. But wins over Shiva in the form of Parvati, daughter of Himavan.

Loved the description on how Shiva reiterates to the world that Shiva is incomplete without Shakti and that Shakti is a part of him, by becoming the Ardhanareshwara.

The secret of Bholenath refers to the innocence of Shiva, during different occasions. Parvati tries her level best to make Shiva understand the rules, that form the basis of human culture-based society, but Shiva’s innocence is beyond all these. There are many stories which makes us see the innocence of Shiva. That’s why Bholenath is represented in the form of  a child.

I particularly liked the questioning of the cultural norms by Bholenath.

Through the seventh and final secret of Shiva, the Nataraja, the God guides the humanity towards the destruction of fear and offers the wisdom to outgrow fear, which is liberation or moksha.

We were taught many stories about the avatars of Vishnu; especially the Ramayana occupied a major part of our childhood story times. But we’ve never been told so many stories about Shiva, except for a few like the Ganesha and Muruga related ones. And this book opened my eyes about many facets of Shiva and it was enlightening.

Some people might not be comfortable reading about the explanations of phallus shape of the Lingeshwar or how Shakthi awakes the still mind of Shiva to the realities of the humanity.   There are people, who are unwilling to see different perspectives to their deities other than what has been taught in the childhood.  But I feel that the author’s details makes perfect sense.

Those beautiful and rare pictures, that is a part of every page, are a treat to the eyes.

Yesterday was Karthigai Deepam for us….which is essentially the day when we celebrate Shiva as the pillar of fire, where he burns without fuel and without any beginning or end. And what an apt ending to my reading of Shiva’s secrets. I felt that I’ve read for a purpose, which might become clear over the days to come.

This book has been reviewed as part of Blogadda’s Book Review Program.

This review is a part of the Book Reviews Program at BlogAdda.com. Participate now to get free books!

I remember this bday very well….I was in my teens and I wanted to celebrate my bday like how my few other friends were doing. But there was quite a hungama at home, when they heard this. They can’t believe that I wanted to celebrate it with my friends by giving them all chocolates. That was the smallest thing I asked – probably the Fanta orange hard toffee or something like that. And what an argument happened after that. The elders at home were shocked at my request. Then finally mom convinced everybody and she made coconut burfi for giving to my friends. Even at that point of time, buying from outside shops was a big no-no for us. But, I was very thrilled to take sweets for my friends and its the only bday I can remember as a teen.

I’ll get a new dress for my bday and another one for diwali. If I am lucky, I might get one for Sankranti.  But that dress is something that I await the whole year. I yearn for it. I plan for it.  I think of the colors, design, material all year-long. Finally I may get something that I’ve not imagined. It was totally fun and I enjoyed them all. The underlying thread of love was so profound.

Later, when I started working, my colleagues used to gift me with Crackle – the Cadbury chocolate, of which I had a great fetish. And I’ll get all kinds of cards – both hand-made and bought, and all of them made my day.  I still have the card which a colleague gave me – written in C Language, since I love that language and still consider myself a pro in it. The love from people around me made me ecstatic.

Slowly and steadily, the art of celebrating bday parties at home became a ritual, with the darling girls coming into my life.  The smile, the joy and all the fun we had, made the party justified. My parents actually enjoyed these parties and I was happy for them. The love was weaving a beautiful quilt around the family and I went with the flow.

And now, I’ve come a long way in the art of celebrating bdays from coconut burfies to cakes and poems.

The most important thing is the love that shadows every bday celebrated with family.

And here is today’s expression of love, made with love and for my love of life. Happy Bday to my love, my partner for life.

R u looking for something here ?